After firing more than a few verbal bullets over recent months at Queensland’s Attorney-General (and Fair Trading Minister) Kerry Shine in The Courier Mail and Gold Coast Bulletin newspapers, on ABC radio and here in the Australian Real Estate Blog, I finally got a response (of sorts). The critical issues, of course, had been the largely unregulated role of legally unqualified real estate agents in the preparation and execution of legally binding contracts and the consequent need for proper protection of real estate consumers. 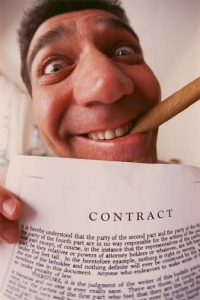 
Apart from my public fusillades, I had also written twice direct to the Attorney-General not only expressing my long-standing concerns but also giving him some examples of agents’ on-going contractual mischief. Finally this letter arrived from a senior policy advisor:

Thank you for your letters dated 21 December 2007 and 21 January 2008 concerning the Legal Profession Act 2007 and real estate agents preparing contracts.  The Honourable Kerry Shine MP, Attorney-General and Minister for Justice and Minister Assisting the Premier in Western Queensland, has asked me to reply to you on his behalf.

After concern was expressed that the new wording might be too narrow for certain activities typically engaged in by licensees, a transitional regulation was made to urgently clarify the scope of the exemption.  It exempts the activities of licensees authorised under the Property Agents and Motor Dealers Act 2000 and ancillary or incidental activities that are part of the ordinary course of business undertaken generally by a relevant licensee.

Under the Property Agents and Motor Dealers Act 2000 (PAMDA), before signing a contract, purchasers are advised, but not required, to obtain independent legal advice.  However, it has been a longstanding commercial practice for PAMDA agents in connection with their authorised activities to complete the wording of contracts and insert special conditions at the request of the parties.

The Attorney-General would of course be concerned if legal practitioners are identifying deficiencies in contracts or clauses drafted by PAMDA agents.

The Queensland Law Society has expressed concerns about real estate agents engaging in contract preparation and the Attorney-General has agreed to meet with the Society to discuss this issue, to examine the extent of contract deficiencies and to consider what responses, legislative and otherwise might be necessary or appropriate for addressing this matter.  To assist these discussions, you may like to write to the Law Society to inform it of your concerns and the issues that you have experienced in circumstances of contract deficiencies.

I trust this information is of assistance.


After I’d cooled down considerably, I sent off a remarkably restrained reply expressing my deep disappointment…

« Don’t Be A Party To Mortgage Fraud!
How To Save Your Home »