If the head of a police force or a government department were to attack entrenched corruption by telling its members that it “strongly recommends” that they refrain from involvement, one would question whether the organisation was serious. 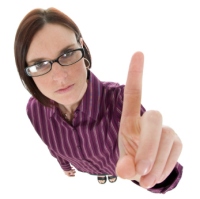 In earlier postings I have attacked the Australian Institute of Conveyancers (Victorian Division) (AICVIC) not only for failing to take action to stem the spread of client-trafficking corruption in the real estate conveyancing industry, but also for advising its members in a manner which, in my opinion, is calculated to condone and encourage the problem. See previous postings:

On 24 November, 2008 I emailed every committee member of the Australian Institute of Conveyancers (Victorian Division) as follows:

“I note that the AICVIC website includes a PDF document titled “Startup Kit”, and which advises those interested in commencing a conveyancing business, “When commencing your business and establishing contacts you may consider paying referral fees…”  I believe that this statement suggests to newcomers to the industry that this practice is the norm, that AICVIC condones the practice, and that AICVIC seeks to warn newcomers to take care when paying for referrals.

I request that, as the AICVIC committee, you take a leading role in banning the corrupt and unethical practice of client trafficking.”

“Your interpretation of what was on our website in 2002 does not reflect the actual position of the AIC but merely preliminary advice to conveyancers.   Although we disagree with your interpretation we are changing our website to better reflect the Institute’s policy…We do however agree with your stance on the payment of referral fees and the AIC strongly recommends against it’s Members offering “kickbacks”, referral fees and commissions (secret or otherwise).”

« The Value of a Valuation
REIV Caught Cheating – Again »