The document known in the real estate industry as “the standard REIV Contract Note” has been banned.  As from 28 September, 2008 the only document available to estate agents will be the standard form of contract prescribed by the Estate Agents (Contracts) Regulations 2008 or a contract prepared by a Legal Practitioner or a Licensed Conveyancer.

The single page Contract Note was favoured by real estate agents in Victoria, firstly because of its name.  Everyone knows what a contract is, but what is a Contract 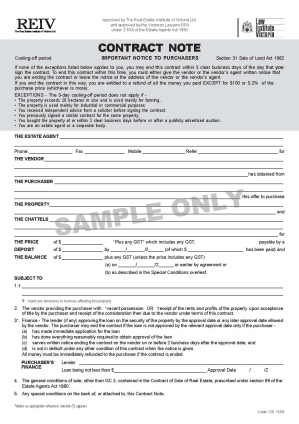 Note?  Whenever a purchaser asked an estate agent if the Contract Note they were asked to sign was an actual contract, the answer was always a firm “No”, followed by the words, “it’s only an offer, and there is no contract unless the vendor accepts it.”

Technically, this explanation was true.  No mere document is a contract unless it has been executed by the parties. But this was not really the question being asked.  The question “Is this a contract?” was really a question about whether or not the purchaser was entering into a binding contract.  But the estate agent was always able to avoid having to answer this question truthfully because the name of the document, “Contract Note” suggested that it was something less than a binding contract.

The Contract Note was also deceptive insofar as it presented as a lesser alternative to the full “Contract of Sale of Real Estate” which was also prescribed in the Estate Agents (Contracts) Regulations 1997.

In fact, the Contract Note was every bit as powerful as the full version of the Contract of Sale of Real Estate.  It was just that the details were hidden from consumers.

Using the concept of “incorporation by reference” the Contract Note displayed only brief details of the transaction on its face, but it bound the purchaser to all of the conditions contained in the Contract of Sale of Real Estate by including the following clause under the heading “SUBJECT TO”:

“The general conditions of sale, other than GC3, contained in the Contract of Sale of Real Estate prescribed under section 10 of the Estate Agents Act 1980.”

Of course, no purchaser would go to the trouble of looking up the Estate Agents Act to find out what the full Contract of Sale of Real Estate contained.  Not that it would do them any good anyway, as Section 10 the Estate Agents Act has been changed by subsequent amendments to to the point that a lay-person would soon lose the trail.  So what would the purchaser do?  The purchaser would ask the estate agent.

The answer of the estate agent was invariably, “It’s just standard wording, and if there’s a contract later it will have the general conditions in it.” Technically true, but highly deceptive nonetheless.